The Summer months are wonderful when they’re in the distance, aren’t they? Warm and sunny, the sky full of puffy cumulus clouds. An iced tea to cool you down so you’re warm but not too warm. You can just feel those winter shivers subsiding for a few months so that you can finally fully relax.

Unfortunately that’s the movie version of summer which is unlike that which most of us experience. Instead, we hide in our air conditioned homes (if we’re lucky enough to have them), can’t sleep because it’s too hot, and slather ourselves in sunscreen in a desperate attempt to avoid that horrible red burn that half of the population seems to have at any given time. It is not very pleasant, and my hopeful plans to show Jack everything that Portland and the surrounding areas have to offer only seems to occur in small bursts when the weather cools down into the 70’s or low 80’s.

However, yesterday I discovered something which, in my eyes, slightly redeems the Summer heat: it is absolutely perfect for making breads in record time.

As a student living in England, my shared house is freezing at any given moment between October and May. The only success that I have with rising bread is to heat up the oven slightly, turn it off, and pray that no one decides to make a pizza.

That is definitely not an issue with Portland in July. Heating up the oven is another terrible thing, but we’ll ignore that for now because this bread is worth it.

The base of this recipe has been slightly adapted from Jamie Oliver’s Three Flavour Focaccia, and the feta/rosemary topping is also from it. If you’re a fan of onions and tomatoes, be sure to check out his topping combinations.

First mix 1 pound of flour (3 1/3 cups for those without a scale) and 1/2 tablespoon salt in a large bowl. Once mixed, spread so that there is a hole in the middle. 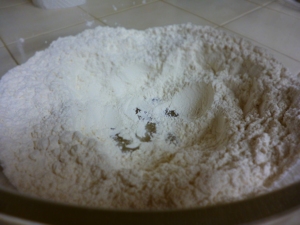 In a small bowl, mix 1 sachet (2 1/4 teaspoon) active dry yeast with 1/2 tablespoons sugar and 1 1/4 cup warm water. Let this sit for approximately 5 minutes until it begins to foam.

Now pour the yeast mixture into the flour and begin to mix.

Once it starts coming together, knead it with your hands.

Even though it will stick to your hands/the bowl/wherever you throw it in a fit of frustration, stick with it. Just get as much off of your hands as possible when you’re sick of it and go wash the rest off. This recipe makes lots of dough.

Grease up a bowl with a bit of olive oil, put your dough inside, and find a nice warm place for it.

If you’ve got a warm day that you’re hiding from, it will be a perfect place to leave it. If you’re worried about something flying into it, just cover it with some plastic wrap or a kitchen towel.

30 minutes later, you have some great dough! It will still stick to your hands so I would suggest rubbing some olive oil on your hands and greasing a baking tray well before using it, but this is where it gets exciting.

Pat it out until it is the size you want it on your baking tray. It will be big, but keep in mind that there will be multiple types of toppings and you’re definitely going to want some of each.

You can put whatever you want on it, but I did the following:

Let this sit for 20 minutes or so while your oven heats up to 425°F (220°C). When it’s ready, pop it in the oven for 20 minutes until the bread has a nice crust and the cheese melts (please note that feta will not melt). Take it out, cut into breadstick-sized slices, and enjoy! 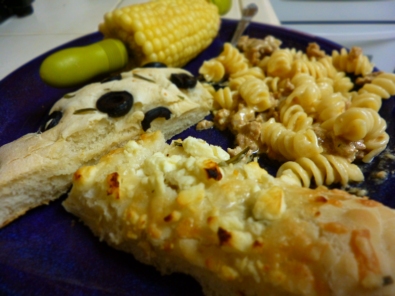